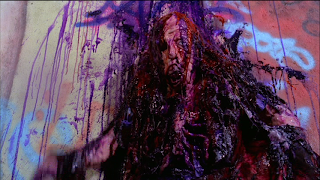 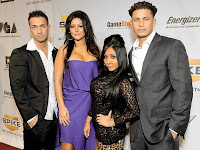 Yes, I know what you’re thinking and no, this isn’t the outtake reel from JERSEY SHORE. But STREET TRASH is about the lowest common denominator letting it all hang out, so you were almost right.
Welcome to the dark, dirty (and smelly) underbelly of NYC… a world where hobos bludgeon one another for the honor of doing so, a place where legless men tumble out of wheelchairs, where the weak are beaten unconscious and pissed on (and vomited on!) for good measure. And if you’re female, well… let’s not go there just yet. That’s right… I’m talking about STREET TRASH, the feel good hit of 1987. 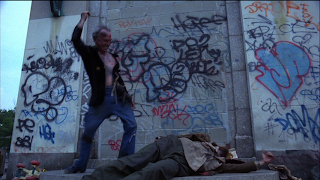 STREET TRASH seethes with grimy, sweaty hobo sex and really bad hootch. It’s a black comedy boundless in it’s audacity and capacity for disgusting imagery. It starts out with a liquor store owner uncovering a strange old crate of wino hootch called “Tenafly Viper“, which (though it sounds like fermented snake venom) is a real steal at a buck a bottle. We quickly learn that anyone who drinks it suffers a gloriously gruesome “Nuke Em High”-style meltdown, which totals just over a half dozen principal and peripheral characters by the film’s climax. 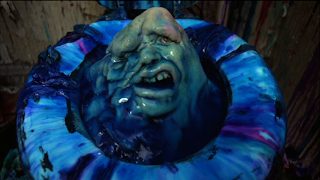 There really aren't any “good guys” in STREET TRASH, just an oddball assortment of winos, psychos and greaseballs. Early on we meet a dirty young hobo named Fred (Mike Lackey), an odd, unsympathetic choice as one of the main focal points of the film. Fred is stomped unconscious after he steals a few bucks from a bum called Wizzy, who is a lackey for the big, dirty uber-bum, Bronson (Vic Noto). Bronson, a hairy, psychotic Nam-vet, rules the junkyard (where much of the action takes place) with an iron fist and a massive, holstered human femur bone carved into a knife. 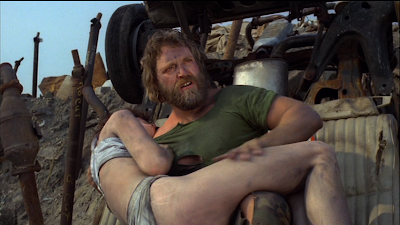 Grievously side-kicking it with Bronson is Winette (the scrawny, rubber-faced, unholy repulsive Nicole Potter), who supplies much of the feral heart and soul of STREET TRASH. Whether getting viciously manhandled by her brutish lover, Bronson, or taking a slug of the “Viper”, poor unsightly Winette never can catch a break. 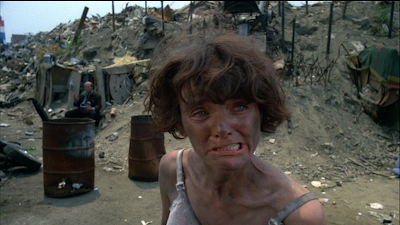 Then there’s Bill the cop (Bill Chepil), a psycho-meathead detective assigned to the yard who (at one point) beats a mafia hitman unconscious and purposely vomits on his head(!). Whenever Bill gets flustered, his massive skull turns red and looks on the verge of popping open like a water-balloon. James Lorinz (who later starred in the hilarious FRANKENHOOKER) is very funny in a recurring role as a wise-cracking doorman to a mafia-owned restaurant. Rounding out (quite literally) this vile menagerie is big, bad Frank (Pat Ryan, the mayor of Tromaville!), the sexual degenerate who owns and operates the junkyard. 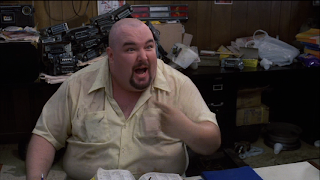 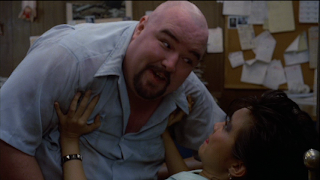 Plenty of wildly offensive action predominates STREET TRASH. At one point, Bronson castrates a bum who accidentally pisses on his head, then a group of them play “keep-away” with the hapless hobo’s dick (to the accompaniment of a wacky theme-song). Later, Bronson beats a principal character to death, then pisses on his corpse.

Another inspired moment features dirty Fred's unsettling copulation with a very drunk gangster moll…when they finish, his crummy abode is ransacked by a growling, dirt-faced mob of hobos, who drag the gal kicking and screaming off into the night. The next morning, Frank (after his crotch is licked by a rottweiler) finds her icy blue corpse lying battered and ass-up in the yard and decides to have sex with it. I could go on and on and on… 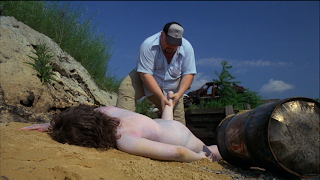 Written and produced by Roy Frumkes, STREET TRASH was directed by Jim Muro, who has since become one of the most sought after cameramen in Hollywood. And it does have a very crisp, professional look despite the low budget and grimy premise. The meltdown scenes, though comically exaggerated, are ultra gory and quite a sight to behold (one fat hobo actually inflates, then explodes in slow motion). Despite being often sick and repellent, STREET TRASH is quite funny and never aspires to be taken seriously. 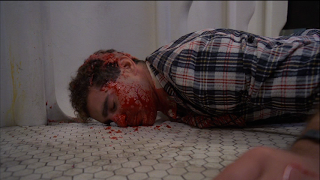 The first time I chanced upon STREET TRASH, I was but a wee lad of twelve… I remember the shock, the titillation, the ecstasy of finding something so determinately depraved and forbidden. Having just rediscovered it after all these years, these grizzled eyes were stunned once again, not only by it’s inherent awfulness, but by how impressively (and with how much conviction) it was all pulled off. And what’s truly perverse is how it’s most disturbing elements are played for screwball laughs. STREET TRASH is the funniest film you’ll ever see in which a dead rape victim is, well… raped. Yikes! 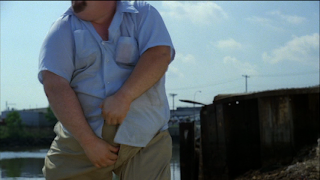