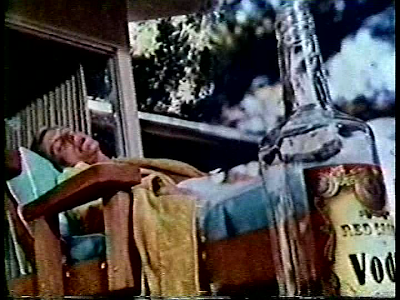 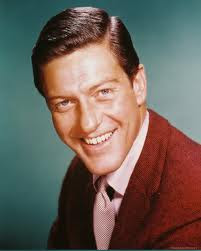 You ever tie one on real tight and wake up the next morning wondering “how many bridges did I burn last night?”, “do I still have a job?” or “did I or did I not punch out the wifey in some strange parking lot?” Well, if you have, you might want to see a lawyer (or a priest) or find a copy of this long since forgotten ABC movie of the week from 1974, starring Dick Van Dyke. 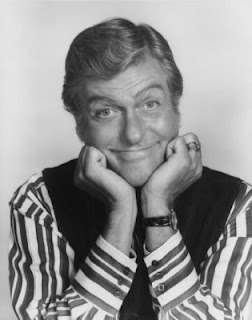 Sure, this sort of material has been covered in just about every conceivable fashion known to man, but have you ever witnessed Dick Van Dyke sucker punch his wife just moments after drunkenly serenading a prostitute with a stirring rendition of The Beatles' “Yesterday”? I think not. Or when was the last time you’ve seen a man in full break-down mode, sobbing uncontrollably three separate times in under 80 minutes? 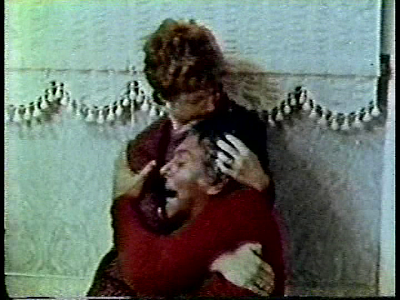 Beginning with a night of celebration following a successful speech by his boss (ghost written by Van Dyke), Dick phones the wife (Lynn Carlin), telling her he’ll be home by ten and won’t be drinking. Moments later, he hastily rebukes a co-worker’s attempts to accost him with drink, then succumbs, proclaiming “well, just a little…”. It isn’t long, though, before Dick’s making a spectacle of himself- playing drums with the hired band, then later sprawled out on a couch with the regular office carousers, half empty fifth in tow. 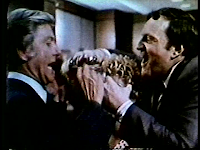 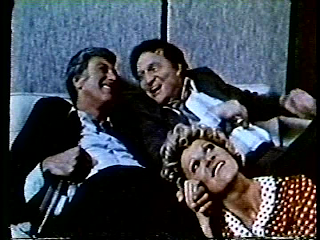 THE MORNING AFTER is essentially a series of escalating domestic episodes, unraveling with indisputable sincerity, but all the subtlety of an ABC Afternoon Special. It is a “message” movie, purely, though it has one indelible factor that casts it far beyond all the requisite pandering. That is the haunting, mercurial performance of Dick Van Dyke as the husband, father and successful PR man whose on the verge of throwing it all away as his alcoholism has begun to take precedence over all else. And legendary fantasist Richard Matheson’s script, though marred by the inherent trappings of that tight TV movie construction, is uncompromisingly tough, ringing painful and true throughout. 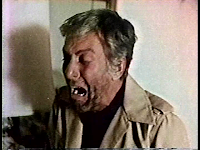 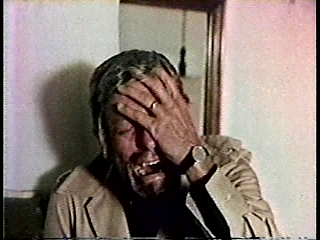 When Dick stumbles in the back door the morning following the office party, his long suffering wife lays into him immediately-- and again when she discovers him laid out on the patio drinking screwdrivers a few hours later (while a deceptively similar cover of the Beatles' “Yesterday” appears for the first of several increasingly arduous instances on the soundtrack). 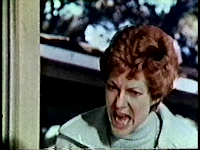 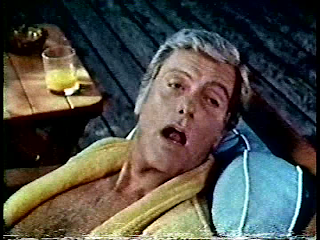 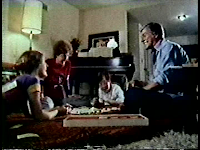 Things do return to marginal normalcy as Dick attempts amends the following morning, including making pancakes for his young son and teenage daughter, orchestrating a family basketball game as well as a rousing bonding session during a board game (all swiftly handled in montage). Awww… that’s our Dick. Schmoozing and charming his way back into their hearts. Don’t guilt beat all? 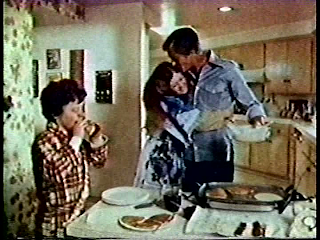 The complacency is short lived, though, as soon Dick’s jeopardizing his career, sabotaging a dinner party with friends and generally proving to the world what an incorrigible drunk he is. When his wife first threatens to leave him after a particularly nasty incident (the first hint at violence), he begs and pleads, promising to get professional help. In a session with his new therapist, we learn he’s got plenty of unresolved pain regarding the death of his parents and feelings of inadequacy, etc, though after he breaks down during his second session, he tells his wife the doc gave him a clean bill of health, he’s cured and can even return to drinking casually in due time (blood vomiting notwithstanding). 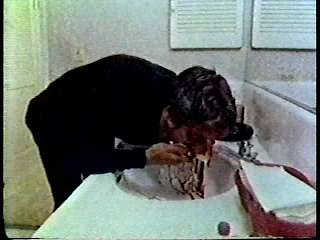 Things get really nasty when Dick begins to struggle with a speech he’s writing for the boss and his daughter asks for a ride to a friend‘s house… he snaps at her (“Is your mother unconscious?!”), then reluctantly agrees, burning rubber the second she exits the vehicle. This isn’t the same huggable, lovable Dick Van Dyke your parents grew up with. This is anything but… When his wife catches him straddled up to a bar, soliciting the affections of a much younger prostitute, she drags him out into the parking lot where they engage in a wrestling match for his car keys, an impromptu left hook dropping her flat on the concrete (with a black eye) while Dick speeds off into the night. 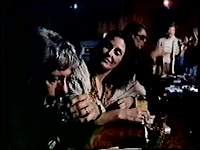 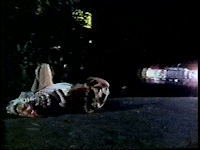 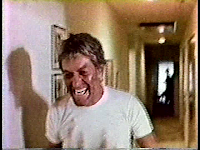 Things only grow bleaker from here, the downward trajectory becoming startlingly, inextricably dark as the family leaves and we find Dick drunkenly thrashing down the hallways of his home (now in dishevel) calling out for his wife. Things get worse yet when he winds up in the city hospital’s psych ward after waking up on the beach clawing at the invisible beasties invading his flesh. 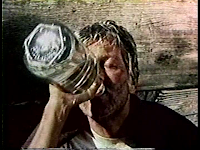 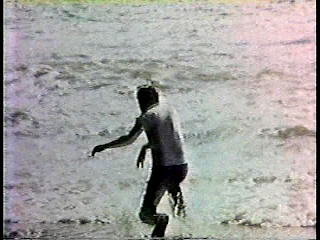 When it becomes clear he’s lost his family, his career, everything, his resolve fades to hopelessness and he escapes. Coming to terms with the finality of his situation, he gives his wife one last emotional goodbye call from a payphone. “Tell the kids I love them… I’m ashamed that I never really did. And I love you with all my heart. Forgive me- all the pain that I’ve caused you. It’s no good, honey. It’s just no good, I’m no good. There’s no point. Just… no point. Goodbye my heart!” 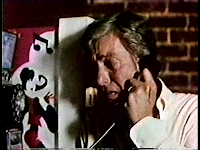 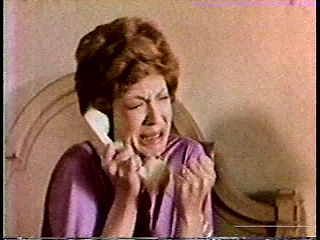 It’s the kind of gut wrenching emotional display that lingers long after the screen’s gone dark. Within the context of a TV melodrama, some would argue, it might come off as overwrought, blustery spectacle, but I’d digress. Sure, the plotting smacks of sentimentality and overt preachiness (as this type of story often can't avoid), but there is truth in Van Dyke’s histrionics that cast them almost beyond reproach (and earned him an Emmy nomination). Consider his then recently admitted battles with the bottle as well as the fact that he’d been almost exclusively a comedic performer since the onset of his career. When it’s all said and done, he really went to the well for this one, creating one of the darkest portrayals of full blown alcoholism ever conceived. 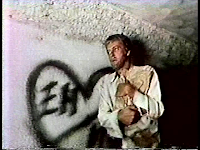 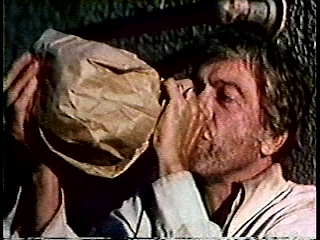 Following that goodbye phone call, we’ve one last shot of Van Dyke walking down a dark corridor towards the beach, a place where vagrants dwell-- a filthy, shambling specter of his former self. Reaching the end of the tunnel, he collapses, crumbling into a broken heap of pieces of the man he thought he could be… taking one last drink as the scene fades out. 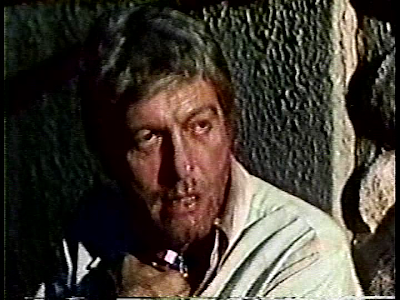