A life spent in purgatory, waiting… for this?! Many years ago I saw an exploitation preview so sleazy, so incredibly nasty, it’s haunted me ever since. I’ve mimicked that greasy venom-spewing, cigar-chomping narrator countless times, vulgarly exhorting “Teenage Mutha!” to anyone foolish enough to stand for it. I’d dreamed up an infinitely dark, corrosive abyss, an unholy well seething bile and contaminants of the vilest order- the only place unbridled teenage lust could rightfully call “home“. And now I’ve found it. The infamous exploitation classic. Yep…

Ummm… okay, for starters the writer/producer/director Jerry Gross seems pre-occupied with race cars. Those swingin’ high school kids sure dig racing. Okay, this is a movie about a pregnant teen, right?! PLEASE!!! Uhhh… no. Nobody has sex in this film. And at no time does anyone get pregnant(!). Ever! What the?! Doesn’t happen. A dumb girl named Arlene LIES about getting pregnant. And, furthermore, Jerry Gross LIES even bigger with the misleading title and dirty, nasty, lying whore of an ad campaign.

TEENAGE MOTHER does have a fairly coherent premise, I guess... It’s a creaky potboiler about a Swedish hygiene teacher who stirs up controversy in the small, all-American community she’s settled into. It seems she wants to teach sex education to the students… Big fuckin deal, right? There’s a scummy pot dealer (named Duke, no less) who tries to steal the dumb girl away from the good kid, Tony. The local gangster who supplies the grass to Duke decides he wants to get rid of the sex-ed teacher because… well, because she gives him bad vibes (good enough?). Duke attempts to rape the Swede, but is interrupted by “coach” (Fred Willard, completely wooden in his film debut). 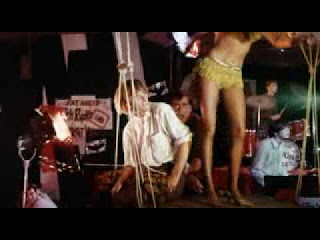 The groovy kids down at the “Action House” convulse rigidly to the tepid beats of “The Young Set”, proving once and forever that white kids only think they can dance. When would-be rapist Duke makes a break for hare-brained Arlene, nice-guy Tony kicks his butt. I think that about sums it all up. Oh yeah, I forgot to mention… the audience is ambushed at the end by stock footage of a real birth (ala MOM AND DAD). And it is incredibly DISTURBING. Unless I just hallucinated (a distinct possibility...), they used something like a car-jack to remove a baby from the womb. I think this is so the audience didn’t burn the theaters down in protest. 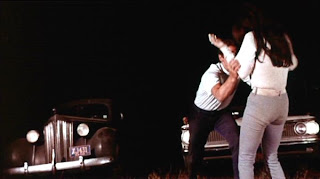 I smell conspiracy here. It’s as if the producers deliberately set out to trick anyone with a pulse into thinking they were in for some cheap thrills. Hey kid, you wanna see something real boss? Ahhh… the old bloody finger in the box trick. Ha ha. Lame. Oh, before you go off all half-cocked, check THIS out! You see, I told you so… hey, don’t give me that look. All right, to hell with you then. 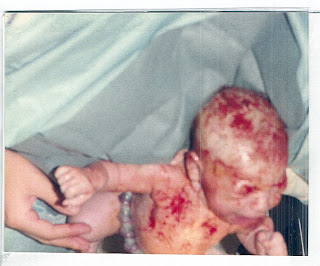