“Riding High-I, Riding High-I… I’d rather be riding high in my super-van” drones the dreadfully catchy (and woefully John Denver-esque) soft-rock theme song. When SUPERVAN dropped into my lap for review, a couple of things immediately came to mind. First and foremost, I’ve always admired the audacity and unbridled gaudiness of the 1970s (a time resplendent with middle-aged men proudly strutting around like peacocks in psychedelic leisure suits with monolithic collars). Second, it’s an action/adventure/comedy alleged to be exclusively about the custom van culture (I mean, can you imagine?!). 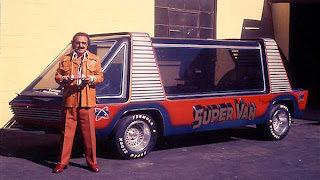 SUPERVAN begins with Clint (Mark Schneider, the frog-prince of vans) leaving his dad in a huff, suitcase in tow… “I’ve got a chance to do something!”. As he climbs into his glorious brown behemoth (dubiously airbrushed “Morgan the Pirate”), his father sighs indignantly while pulling out a wad of crisp bills, as if to say “sayonara, see ya later o’ van-ish boy”. 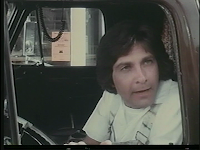 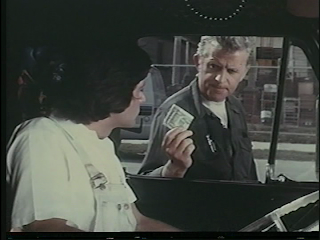 Once on the road, Clint beams triumphantly as the radio bellows endlessly about vans, including the announcement of the annual van show, “Freak-Out 76”, which we get a full-on belly ache of later on… along the way Clint saves a spunky, fuzzy gal named Karen from a pack of would-be biker rapists (setting up the obligatory adversary-biker subplot). While fleeing the greasy bikers, Clint casually parks in the gaping mouth of a landfill compactor, which crushes “Morgan the Pirate” as Clint whines about the five grand it was going to win him at the big “Freak-Out”. The biker inexplicably follows suit, literally pushing his bike into the compactor, then feigns outrage as it‘s crushed. 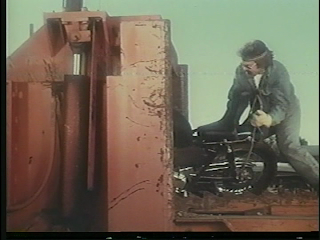 Next thing you know, we’re at a futuristic shop where Clint’s screwball scientist buddy unveils the solar-powered, laser-beam blasting “Vandora”, which elicits a goofy, heavenly tributary squeal of “HEY VANDORA, HALLELUJAH! HALLELUJAH!”. Apparently, the head of Mid-American Motors (generic baddie Morgan Woodward) had commissioned it’s assemblage to out-van all the dimwits at the “Freak-Out”, but for some reason that remains unclear, Clint’s buddy gives the van to him. I think this is sort of a “sword-in-the-stone” type deal, but I’m all guesses here… 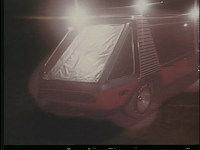 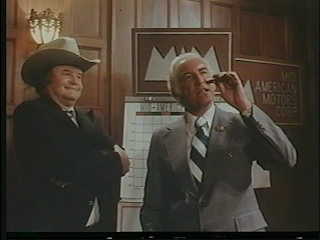 Anyways, what we’ve essentially got here is many, many shots of custom vans and all the requisite frolicking that goes with your average van rally. Apparently van culture is all about the kicks, as we see lots of “vanners” get drunk and high while ogling/groping their accommodating female counterparts during the hazy “Freak-Out” montage (accompanied by the “Freak-Out” theme song). 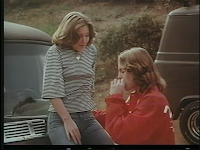 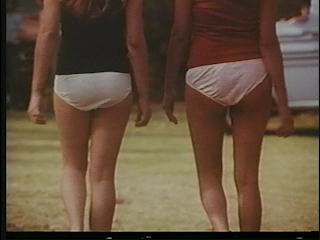 This inevitably leads to a “vanner” wet t-shirt contest in which a thoroughly sloshed Charles Bukowski (no shit!) douses each and every gal he can with a garden hose… the victims of which are coerced into exposing their glistening nipple buds for a shot at drive-in immortality. During this sequence, we also catch Bukowski eagerly, drunkenly attempting to corral a frightened, soaking wet blond half his age while donning a “Wet T-Shirt Contest WATER BOY” t-shirt. The DVD case promises “special appearance by Charles Bukowski” and it is indeed special, though I seriously doubt he even knew (or at least remembered) he was in this. 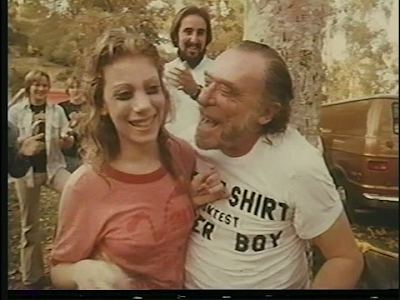 From there, we get much more ado about vans including a muddy hill-climbing contest, a comely trio of singing “vanner” boosters (the less said about these gals, the better), an endless stream of soft-rock odes to “vanning” and lots of footage of the custom paint jobs, ad nauseam. The bikers jump Clint, Karen uses Vandora’s laser beams on them, Vandora wins the contest, etc… 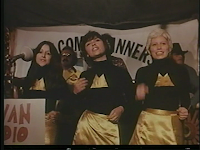 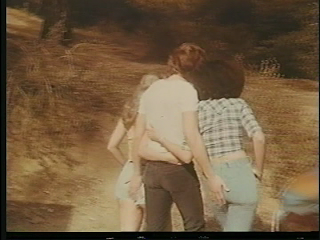 For the life of me, I cannot figure out the mystique of the custom van subculture. Sure, we get lots of footage of half-tanked van enthusiasts pawing at one another malignantly, but what else is there? Just not my cup of tea, I suppose... Though some would consider this the “Citizen Kane” of the custom van epic (and I’ll wearily concede it’s the big, fat tyrant of van flicks), to me it’s the bloodless culmination, the final nail in the coffin of “all things van”. 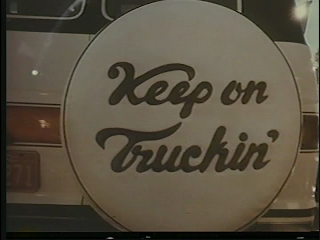