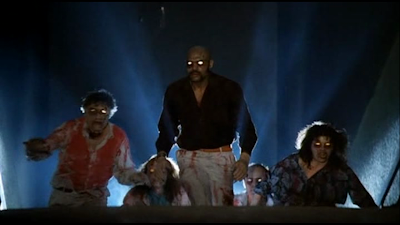 Way out there in the vast beyond lies another similarly battered cultural wasteland of wild hair, unpalatable clothing trends and aggressive pimps demanding to instruct the voice of reason. What if, say, Italians pretended to be Germans, who in turn pretended to become “demons” who just want to rip your throat out and drool and snarl a lot and hopefully cause you nightmares. 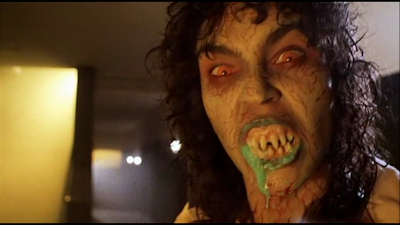 The story, a bit on the loose side (if you know what I mean…), begins on a subway where a wide-eyed priggish gal named Cheryl (Natasha Hovey) finds herself all hot and bothered by a colorful menagerie of new wave-types, then is further distressed by a menacing, uber-hip, shiny masked mute who stalks her through the dark, empty corridors of the mall-ish netherworld that is her local train station, only to confront her with free passes to a new movie theater. All of this is set to the most-excellent “Demons” theme song, a spooky-cool industrial synthesizer jam by Claudio Simonetti (of GOBLIN). 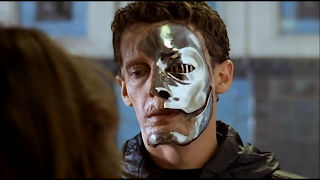 So she thinks, “Wow, cool”, and invites her sassy, frizzy-haired pal Hannah (Fiore Argento, the oh-so tasty “other daughter” of Dario) to go with her. For the record, the Metropol, the West Berlin movie palace in which the majority of DEMONS takes place, remains my all-time favorite “in movie” movie theater. Where else can you go for a couple of hours only to find the exits mysteriously, inexplicably bricked in when you

try to leave? It also seems a fine place to find a wide array of cross-cultural stereotypes (circa 1985), such as “Tony the pimp” (the implacable Bobby Rhodes), the movie’s much-beloved de facto anti-hero. 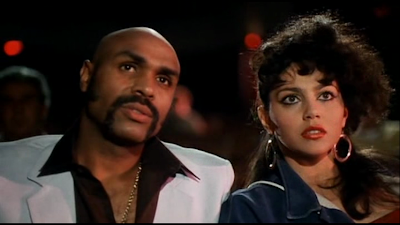 So in the theater lobby there’s this swanky crotch-rocket motorcycle on which an S & M-geared mannequin sits holding a samurai sword in one hand, a silver devil mask in the other…ok, well it is the 80s. Anyways, Tony’s mischievous #1 ho, Rosemary (Geretta Geretta), tries on the mask, which leaves an ominous bloody scratch on her cheek. Foreboding as that is, wait until you meet the rest of the cast, who look like a pack of refugees from a Mentos’ commercial. 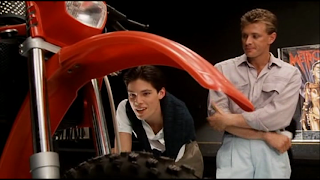 As Cheryl and Hannah settle into their seats to watch the horror film, a couple of dapper pretty-boys insinuate themselves next to the gals, anxiously hinting their “potential suitor” status throughout. 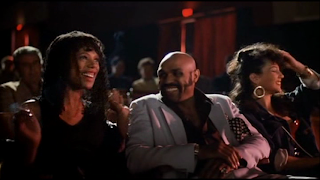 After Motley Crue’s “Save Our Souls” kicks off the movie’s intro (setting the tone for all which follows), the plot refers to a Nostradamus prediction foretelling the “coming of the demons” and in one scene a character finds a silver mask identical to the one in the theater’s lobby, which scratches his face just as it did Rosemary’s. Well, it doesn’t take long for his scratch to become infected and turn him into a “demon”, which cues Rosemary to head to the bathroom just as her face starts going all *Cronenberg* on her. 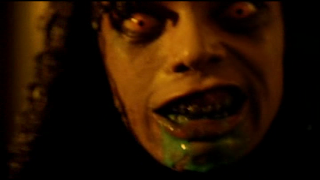 Fanged, clawed, drooling and ferocious, the demons (some of the coolest, scariest monsters to ever grace the silver screen) wreak havoc on the terrified crowd… and as they ravenously spread their contagion through their claws, one by one their victims become possessed, joining their ranks. Whether poking and prodding out a blind man’s eyes, viciously scalping a shrieking, terrified woman or just ripping the throat out of a random passerby, the demons’ modus operandi is simply to raise hell. 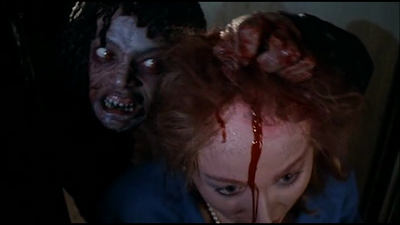 Part zombie, part devil and all bloodthirsty fiend, the preposterous phenomenon of the demon is never reasonably justified or explained… the viewer is simply served up a feral hair-metal rendering of their worst nightmares. And as one unfortunate moviegoer finds out, they’ll rip your nuts off clean through the drawstring sweats and tighty whities you hide them in.  Oh... wait a second.  That actually occurred in the very similarly plotted (and equally awesome) sequel, DEMONS 2, produced a year later. 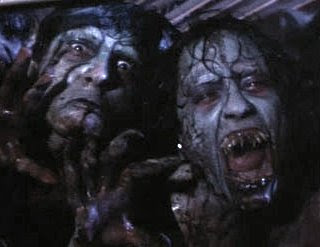 Like much of the production (including the ridiculously confusing script), the acting, dialogue and dubbing are often silly and atrocious… perhaps even doubly so set to glam-metal tirades by Accept, Saxon, and Pretty Maids. Yet all that aside, DEMONS is one of the most memorable horror films of the 1980s, an absolutely entertaining and exhilarating fright show with as many unintentional laughs as there are gruesome thrills and chills. 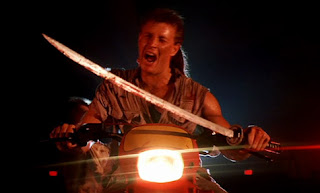 Produced and co-scripted by Dario Argento and directed by Lamberto Bava, DEMONS is loaded with cheap shock moments and scares by the bucket load, running the gamut of gory spectacle and grisly mayhem. And Sergio Stivoletti deserves endless accolades for his make-up and gore effects, creating the truly horrific demons (and the carnage they exact) with as much panache and ingenuity as almost any Hollywood special effects master could’ve mustered. 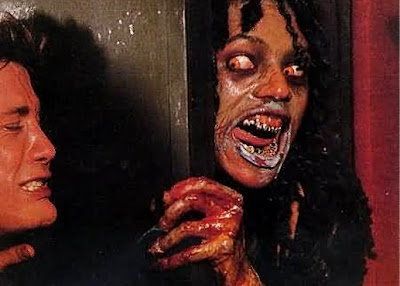 DEMONS is my idea of the perfect Grimm fairy tale for children, except without anything in the way of a morality lesson or conscience whatsoever. If you want to make small children cry hysterically until their eyes burn out and raging torrents of snot run down their precocious little chins, show them DEMONS. 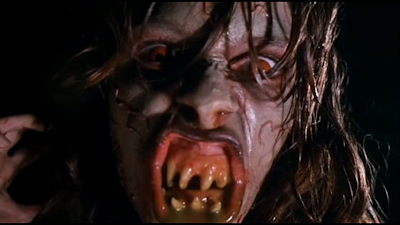