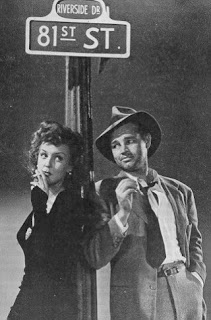 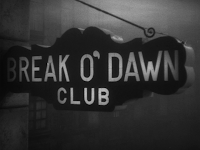 There is a moment early on in DETOUR that sets the mood and tone for all which follows… Al Roberts (Tom Neal) and his gal Sue descend from the “Break O’ Dawn Club” into a heavy fog. With each step, it becomes more and more apparent that Sue is leaving him for greener pastures far away… and with each step they become increasingly immersed in the starkly unreal thickness of it all (the fog wranglers really pour it on here). We nearly lose them completely for a moment as Al’s heartbreak becomes certain… and it seems as if he does all he can to keep from choking while delivering his lines in earnest amidst billowy, caustic plumes of the stuff. 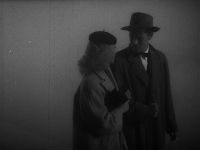 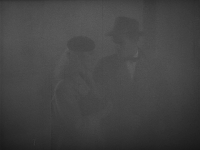 The unforgettable, impossibly dire DETOUR is one of the great legends of the Hollywood noir. It’s reputation is equal parts infamy and excellence… though shot in six days (on a shoestring) and rife with improbable twists, it remains one of the grimmest, most striking archetypes of the genre and features one of the most wicked, definitive femme fatales in screen history in Ann Savage (as the implacable Vera). It’s also filled to the brim with dialogue and narration so hard-boiled and brittle, you’re liable to keep fumbling for the rewind button in incredulous defiance. 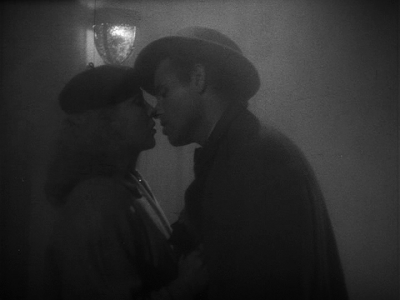 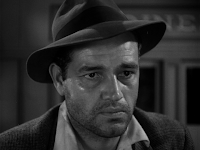 We begin with the deeply distraught and grimy Al hitching into a diner on the outskirts of nowhere, looking just as lost and hopeless as a man can get. After some intense brooding nearly gets him tossed out of the place, he begins to narrate his plight (as the room gets dark and the camera pulls in on his sweating, beaten face). 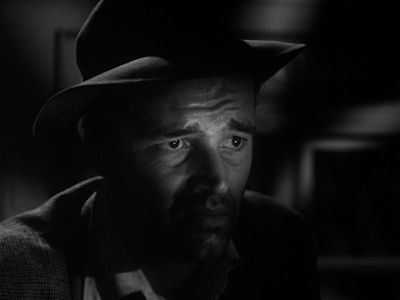 He flashes back to the seedy club in which he plied away his nights (back in New York) playing piano with his singing girlfriend, Sue. Those were the days, he laments… We learn Al’s a bit on the fragile, tender side and desperately in love with Sue, but she leaves him high and dry to wander alone through the foggy streets. 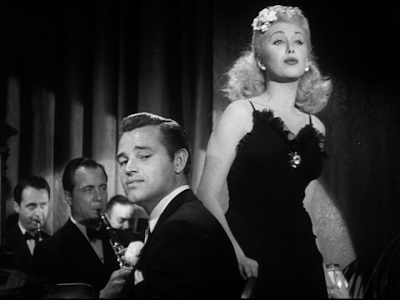 She’s gone to California and he’s now miserable at the club, stricken with her memory… until one night he gets her on the phone to find things aren’t so rosy in dreamland and she misses him. So with little to stand on and scarcely money for food, he decides to hitch to California. At 67 minutes, DETOUR moves swift and terse, with much of the action cobbled together by montage and Al’s gritty narration. 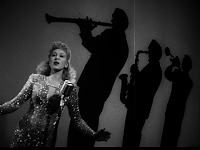 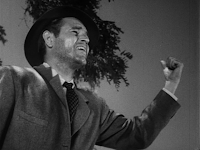 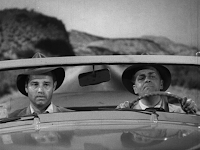 After a long, rough trek, a very weary Al is picked up in Arizona by a bookie named Haskell. Al’s finally relieved as he finds out Haskell’s rolling straight through to L.A., then he notices some bad scratches on Haskell’s hand… “Beauties, aren’t they…I was tusslin’ with the most dangerous animal in da world. A woman.” Haskell continues, “There ought to be a law against things with claws”. “You give a lift to a tomat-a, you expect her to be nice, dontcha?” 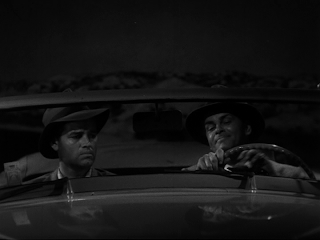 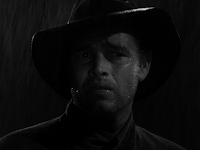 When an inexplicable accident during a heavy rain causes Haskell’s death, Al panics, believing the police will surely pin things on him. He hides the body along the side of the road, grabs Haskell’s wallet and hightails it out of there in the Lincoln Continental. After crossing the California border (and finding a good deal of cash in Haskell’s billfold), Al stops at a gas station where fate deals him yet another bad hand. It’s there that he decides to pick up a mysterious, attractive hitchhiker named Vera (Ann Savage in her signature role) and this is where DETOUR really takes off. 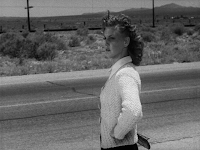 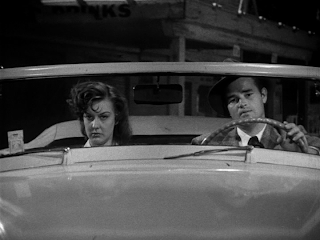 Vera, though quite alluring, looks demonic from the get-go… “Man, she looked as if she’d just been thrown off the crumbiest freight train in the world”. She’s guarded and elusive during their first shared words. “You look like a Phoenix girl to me.” “Are all the girls in Phoenix that bad?”, she drolly retorts. After a short nap while Al drives, she springs to life as if shot out of a cannon, wild-eyed and accusing him of killing Haskell and stealing his car/money, etc. 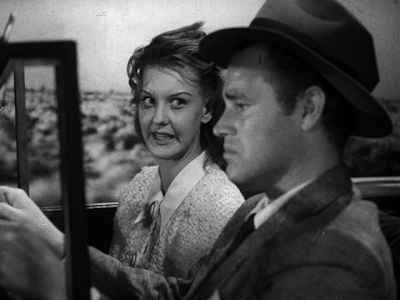 Al quickly realizes this is the girl Haskell spoke of, the “animal” he’d tussled with. From here on, Ann Savage viciously bulls her way through every line with an unrivaled authority… “You know, as crooked as you look, I’d hate to see a fella as young as you wind up sniffin’ that perfume in Arizona they hand out free to murderers”. Within a few short minutes she’s completely established her dominance, blackmailing him into submission (“just remember who’s boss around here!”). The stunned, thoroughly emasculated Al can do little but grovel wearily at her side and drive. 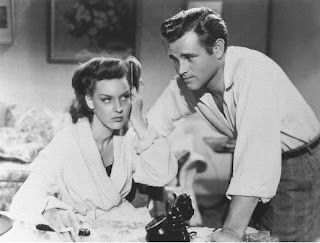 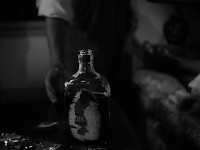 Once they get to L.A., Vera’s scheming to use Al to sell the car and much more, refusing to let him out of her sight. They rent an apartment in which she stalks around seductively, drinking whisky in abundance and passing sexual innuendo at every turn… though he despises her completely and seems more frightened (and disgusted) than aroused by her predatory lusting. And during these moments, his plight becomes irretrievably, almost mockingly hopeless… 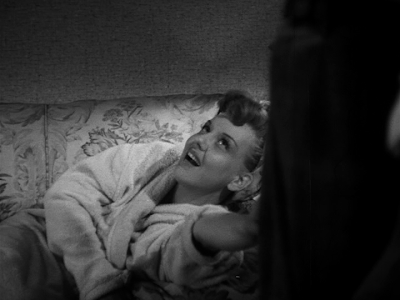 Director Edgar G. Ulmer accomplishes so much with so very little. Using a few spare sets and a lot of rear-screen projection driving scenes, he was able to create an improbable masterpiece in 6 days for under 40 grand (shooting for poverty-row PRC studios). Martin Goldsmith’s seedy, grim and habitually implausible script sizzles nonetheless, mostly due to the amazing performance by Ann Savage (though Tom Neal is terrific as well). DETOUR is a desperate, haunting melodrama drawn in broad strokes… with a penchant for cruelty that can feel like an emotional sucker punch. 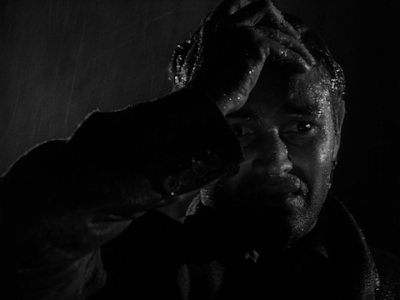 Though it would seem ridiculous that the unarmed Vera could so easily threaten and control a man she’s accusing of murder (out on a deserted stretch of road), her performance is chillingly convincing. Vicariously, you’re vulnerable, threatened (and, let’s face it… hopelessly turned on) by her throughout. If you ever meet a scowling devil-woman like Ann Savage, no matter how attractive you find her, DO NOT give her a lift. Remember these words, lest they’ll haunt you to your dying gasp (as you’re sniffin’ that Arizona perfume…). 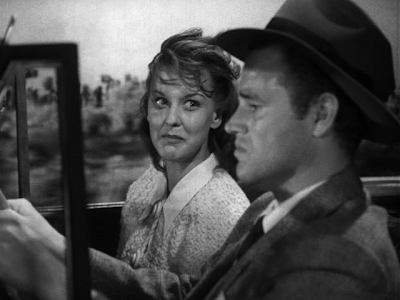