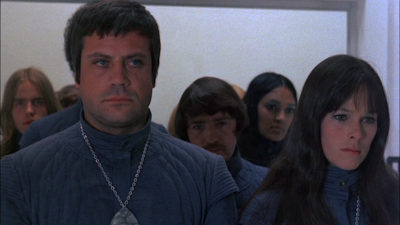 Russ and Carol McNeil are lost in a nightmare of caustic, murky smog, a world where the oppressed wander blind and hungry through the surreal haze of a police state, a future where resource and space restriction has rendered child-bearing a capital offense... ZPG creates such a place, one that forebodes nothing more fantastic than the inevitability of things to come. Preservation of the species is key, the last fundamental, the purest virtue… 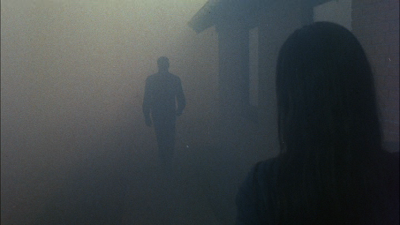 As far as science fiction premises go, this one in particular seems to promise much in regards to self-examination and thoughtful ruminations on the struggle between heart and mind. If the world represented in ZPG is that of a police state, it is one by virtue of necessity… it is policy written not only in logic, but in the desperation of survival and lamentation of all the mistakes mankind had wrought to reach the brink of extinction. The world governing body has declared child-bearing illegal for thirty years, a decree punishable by death. But despite necessity, people are desirous, decadent creatures whose logic is often clouded by emotion. And in ZPG, mass depression has become the norm and cold, analytical (and forceful) psychiatric assistance is the mere push of a button away. 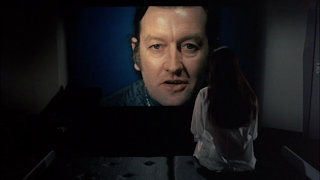 The story begins with the government edict being announced to the stunned, indignant populace. The first shrill cry of shock and revolt is that of a woman, signaling ZPG’s somewhat disharmonious emphasis on the maternal instinct throughout. So eight years later we’re brought to a long line waiting to get into Baby Land, a company where couples buy needy, clamoring child-like dolls programmed to simulate, instruct and fill the presumptive void. Russ (Oliver Reed) and Carol (Geraldine Chaplin, daughter of Charles Chaplin) wait in line stoically, then anguished in view of the spectacle and illogic of the previous couple’s doting over the scarcely realistic doll, grieving their dilemma as they leave empty handed. 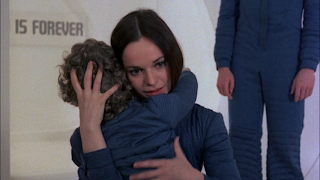 Into the haze (in which everyone must where oxygen masks) they stroll impassively, deciding to dine at a nice restaurant. Such is their lament though, as violin and piano accompaniment doesn’t make the pasty rations any more appetizing… shaking his head, Oliver Reed ponders “I wonder what the Hamburger Monte Christo… would taste like” as if this predicament had just recently been thrust upon them. 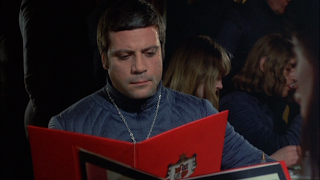 So the future isn’t so dandy, as next we wait in a long line to get into a museum of history where we find almost every species aside humanity has become extinct. This is where Russ and Carol work as performers in an exhibit enacting presumed scenarios from 1971 (in which they and their neighbors play swingers, one of several humorous indulgences provided). While spectators wait in line, a museum announcer informs us the true cause of the present atmospheric conditions (called the “smog blanket age”) were the “unrealistic and inept policies of the leaders of industry. The crimes committed by them were further perpetrated by the political and religious leaders, who irresponsibly allowed the equally devastating crime of overpopulation”. 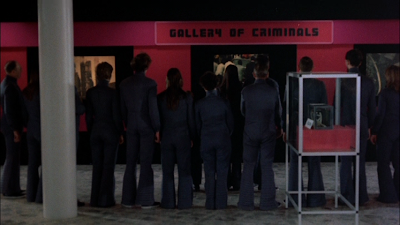 This at first would seem to instruct the conscience and motive of ZPG (viewing the film nearly 40 years out of context), it’s ambivalence, it’s “mind” as opposed to it’s characters’ “hearts”. It’s a conflict of ideals briefly introduced, but ultimately usurped by Carol’s intentional pregnancy and the couple’s desperate desire to be parents. From the moment Carol decides not to step into the abortion machine in their bathroom (what about mass sterilization?), the film becomes sharply resolute in the McNeils’ plight, never questioning their selfishness or the moral implications of their decision. It’s simply them versus a cold, wrathful police state… and don’t forget how beautiful and precious babies are. 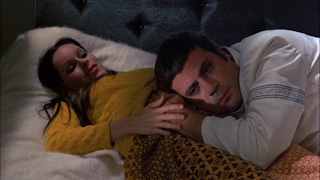 There are several fine moments in ZPG, as well as a few missteps and lapses in logic. The McNeil’s best friends, co-workers and neighbors, George and Edna Borden (Don Gordon and Diane Cilento), provide some of the focal point and later conflict as a couple who’ve opted for one of those doll children. Perhaps the best scene involves Edna’s abandonment of Peter, her artificial son. Her psychologist suddenly appears on her wall-screen pleading her to return to Peter, “he needs you, he needs you, he’ll die without you, he loves you, Edna”. All the while, the doll also pleads incessantly for his “mummy”. In a moment both amusing and haunting, Edna caves in emotionally and rejoices in her love for the doll. 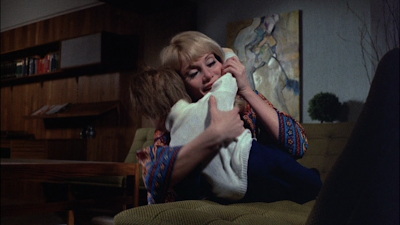 When Russ attempts to research childbirth at the library computer, he’s drawn into an interrogation chamber where he’s tortured, his clever alibi just barely fooling the library security chief and staving off further incrimination (in a rather Orwellian moment of harrowing intensity). 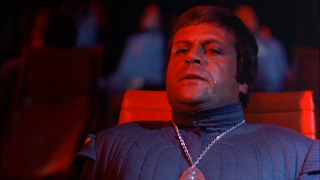 In another pivotal moment, the McNeils witness a young husband and wife with baby corralled into a public square (with a malicious crowd of onlookers screaming “baby!” repeatedly) as an execution chamber is lowered over the pleading, hysterical couple from a ship above. Later, when Carol gets panicky about her baby’s perceived fever, we get several infuriatingly contrived scenes in which she walks around in public, hardly concealing the crying infant- the most ridiculous of which occurs in a quiet, packed theater as the baby whines uncontrollably. Later George and Edna find out the McNeils’ secret, blackmailing them into sharing the baby, with predictable results. 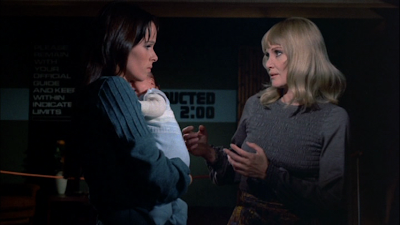 Despite some heavy-handedness, ZPG has an evocative, moody atmosphere that has aged exceptionally well and is still quite thrilling and thought-provoking. Oliver Reed is perfectly cast in a role custom-made for his trademark brooding (the few seconds he’s afforded to smile, he seems agonized in doing so). He seethes with antipathy for almost everything, including his own emotions. The climax of the McNeils’ ordeal requires a bit in the way of suspension of disbelief, though by this point the audience has already endured several such improbable moments and should be conditioned to it. With a film such as this, you more or less need to go with the flow to reap it’s rewards. Director Michael Campus, who made his debut with this minor classic, would inexplicably follow it with the infamous 1973 pimp how-to guide, THE MACK. 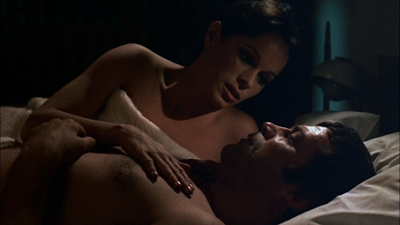 Alas, ZPG is a story rooted in emotion, it’s fiery rhetoric a heartfelt plea for love. Though it’s a message riddled with ambivalence and confusion, it’s a relic of it’s time and a fine testament to the spirit of classic science fiction- and certainly more intelligent and memorable than most of the action-based piffle that passes for sci-fi these days. 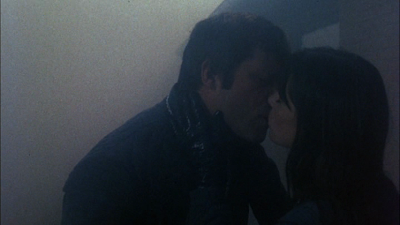