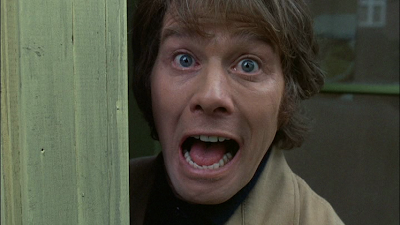 TROG- 1. A profound sense of distrust. 2. A fear of dying alone and forgotten. 3. A conspicuous sexual act performed while underneath a Snuggie (I.e.- “I pulled a TROG while you were sitting next to me.” or “the pups are TROGGIN it.”) 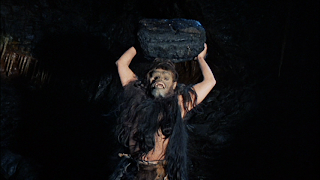 Ok, so TROG is this thing that lives in a cave…I think. In England. It’s a smooth-skinned white guy wearing a furry loin cloth and furry boots and a very hairy headdress with a monkey face. TROG beats the snot out of anyone he crosses paths with. Just clobbers them bloody. I think that about sums it up. 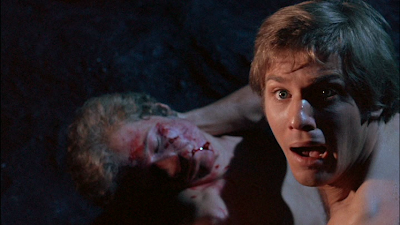 Joan Crawford is a scientist trying to save and study TROG while everyone else wants his head. Michael Gough constantly plots against TROG and comes off rather sinister. I must admit to having a very difficult time with TROG. I told myself I wouldn’t sleep until I’d reviewed TROG, even though I’m already very much lacking sleep. TROG is one of those rare films that you feel is attempting to trick you, like some cunning gag you were never supposed to be privy to. You know they can’t be serious, that in some strange, possibly devious way they were intending to make a bad film even though they were also trying to make money. Confusing. 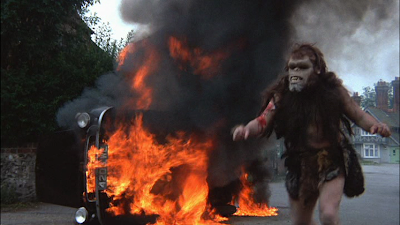 TROG is very hard to define. It’s one of those things where you scratch your head, look at the amount of people involved with it’s production and wonder, “didn’t anyone think that last scene was a little sloppy?”. Or how about that one? That was really bad. Nobody thought to speak up, nobody resisted that? 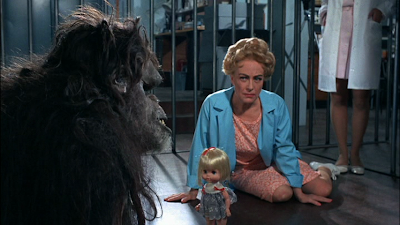 There are long stretches of TROG where people just talk about TROG. There are lengthy courtroom debates about TROG. There are moments when the TROG is cute, playful. But most of the time he just wants to stomp their brains out. At one point, scientists strap TROG to a table, stick electrodes to his head and watch claymation dinosaurs fight. The dinosaurs seem to come from a signal TROG’s projecting onto a filmstrip screen. I think. Maybe. I can’t really put my finger on it, the more I think about it. There is a five minute stretch of claymation dinosaurs. Afterwards, Joan Crawford has to fight back the tears. This actually happened. I think. 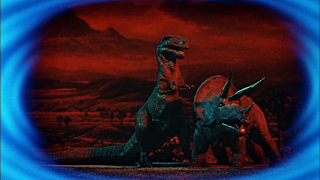 I did watch this sucker, but am having a very difficult time coming to terms with it. After that dinosaur sequence, they do a lot more talking about TROG. Michael Gough unlocks TROG’s cage and then throws the large padlock at TROG. Why? I’m not sure. TROG beats him to death. Joan Crawford tries to reason with TROG. “TROG, stop it!”. TROG likes to body slam people, pro-wrasslin style. TROG doesn’t like loud music. TROG impales a frail, old butcher on a meat hook. TROG pushes a car onto it’s side, which then instantly explodes, killing the driver. 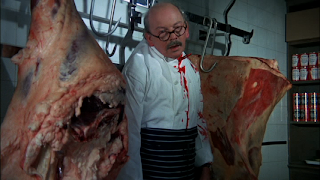 TROG terrorizes a playground, abducting a little girl. But TROG is nice to the girl. There is a gentle TROG theme song (they don’t use this when he’s impaling elderly shopkeepers on meat hooks). Joan Crawford again tries to reason with TROG. “Come on TROG. Give me the child.” Gentle TROG song plays and he complies. “You see Colonel, TROG can be reasoned with.” Military shoots TROG with machine guns. TROG is dead, movie over. But it can’t be. 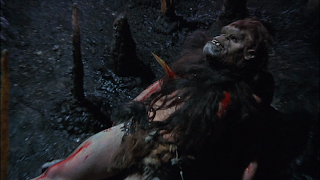 TROG left me feeling empty inside. Lost. How can I sleep now? I have questions for TROG. TROG, why do you kill? We know you have sweet, gentle side. We saw how sensitive you can be, like when you stroked that baby doll’s hair. TROG, what is it you really want? You seemed like you had something on your mind, something you were contemplating between all the vicious assaults. I can’t sleep now. There’s a nagging physical anxiety in my gut and it’s got TROG written all over it. If anyone out there can enlighten me to TROG’s true meaning, I‘ll buy them a beer. I’d like to forget TROG as soon as possible, but I need answers. TROG is confusion. TROG is pain. But TROG is love, man. TROG is love. 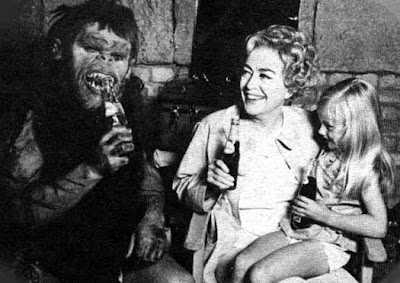